The Australian Taxation Office has confirmed that 320,000 charity workers are receiving JobKeeper. When it ends, charities will need a higher level of investment if Australia is to achieve the post-pandemic economic recovery we are all hoping for, writes CCA CEO David Crosbie in Pro Bono News, 10 September 2020.

Governments, donors and investors often fail to recognise that money spent supporting charities is contributing not just to providing a public good, but also directly supporting the economy. In many ways, investing in charities is the best form of stimulus spending; it creates employment, opens up new opportunities for people, and allows individuals, families and communities to realise their potential.

Modelling undertaken by Social Ventures Australia (SVA) and the Centre for Social Impact (CSI) in their important report published in June this year – Will Australian charities be COVID-19 casualties or partners in recovery? A financial health check – suggested more than 200,000 charity jobs could be under threat over the coming 18 months or so. It seems their modelling was on the money.

This week we have had confirmation from the Australian Taxation Office that 320,000 charity workers are receiving JobKeeper, around 9 per cent of all JobKeeper recipients. This is extremely high when you consider that higher education – a major employer in the charities sector – is largely excluded from JobKeeper.

The ATO has also reported that around 12,000 charities are using JobKeeper. Again, this is very high when we consider that almost 50 per cent of charities have no employees, less than 20,000 charities employ more than five full time staff, and most charitable employment is in education and aged care, neither of which are likely to be high users of JobKeeper. 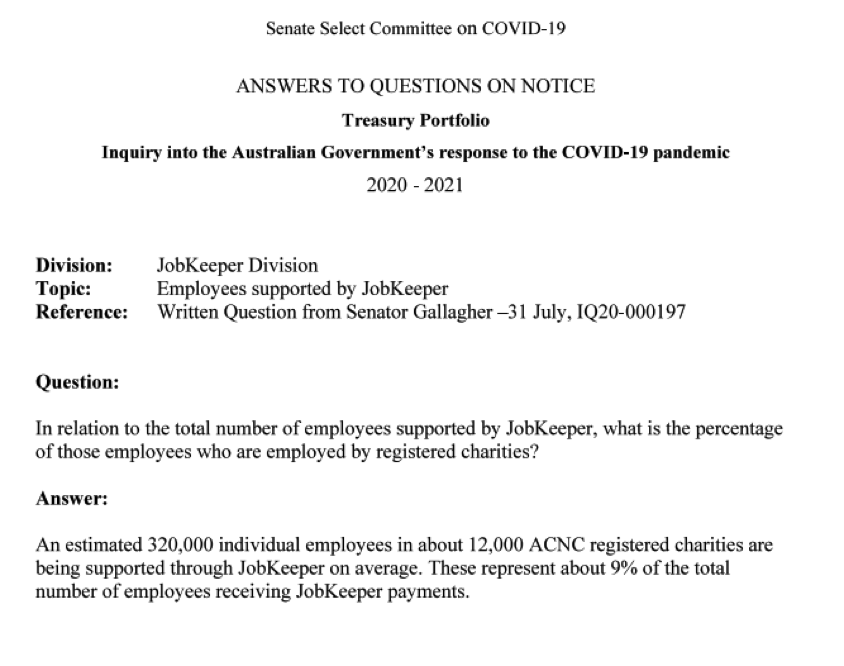 What happens when JobKeeper ends? The calls from the charities sector for a graduated withdrawal of JobKeeper are now critical, especially to the 320,000 charity workers currently relying on the program to continue their employment. As SVA and CSI have already highlighted, we will need further special measures for the charities sector if we are to keep charities that employ staff viable and able to serve their communities post the pandemic.

What is perhaps even more concerning is that beyond the charities sector, many more people across many communities will need assistance, support and connection to others once government support programs like JobKeeper and JobSeeker are wound back.

One of the few positive aspects about the current situation is that most people facing difficulties know they are not alone, that others are also struggling, that it is not just about them. This sense of sharing the burden is critical to the mental health of many. When people feel isolated and personalise their struggles and failings, the mental health impacts are much more severe than when they can see and talk to others in similar situations and share their experiences. Engagement and connection will be critical to many Australians over the coming months and years.

The negative aspect of so many people sharing their struggles is that the sheer number of people needing support is going to be overwhelming for many charities seeking to offer services. It will be critical that governments recognise the emerging needs of those now facing major disruption, dislocation, loss of income, health and security.

Perhaps one of the best practical ways of demonstrating the positive social and economic impact of investing in charities can be seen in a novel new fundraising approach launched this week.

The Royal Australian Mint has produced millions of “Donation Dollar” coins that are now in circulation. The Donation Dollar is the world’s first legal tender coin that features a call to action: a call for the holder to give. Over the coming years a total of 25 million coins will be minted and circulated – one for every Australian. The Donation Dollar is an initiative of Saatchi and Saatchi who consulted with several charity leaders in developing the concept, and the Royal Australian Mint who have embraced the idea and made it their own.

Surveys conducted by Saatchi and Saatchi prior to the launch indicate that over 50 per cent of people will donate the coin if they receive it in their change. This is just one of the good things about this coin and what it represents. Most Donation Dollars will not only be donated to a charity, the charity will then use that dollar, spend it on salaries and services, so the coin will again end up back in circulation, to be donated and spent again.

If each coin is donated only once a month, it will amount to over $300 million in donations each year.

On the back of the Donation Dollar coin there are a series of concentric circles partly covered in a kind of green paint. Over time, this green is designed to wear off making the ridged circles beneath more prominent. For me, this is one of the most important and clever aspects of this coin. The circles on the coin are like ripples in a pond when a stone is dropped, they represent the waves of public good flowing outward, more and more impact over time.

The coins will circulate for decades, the good multiplying as they are donated and spent.

I cannot think of a better metaphor for the real impact of charities, both in terms of the economy and the community.

As Australia enters its first recession since the early 90s with a 7 per cent contraction in the economy, the charities sector is emerging as critical in not only addressing the fallout of COVID-19, but also supporting economic recovery post the pandemic.

We now know that as JobKeeper ends, charities will need a higher level of investment if Australia is to achieve the post pandemic economic recovery we are all hoping for.